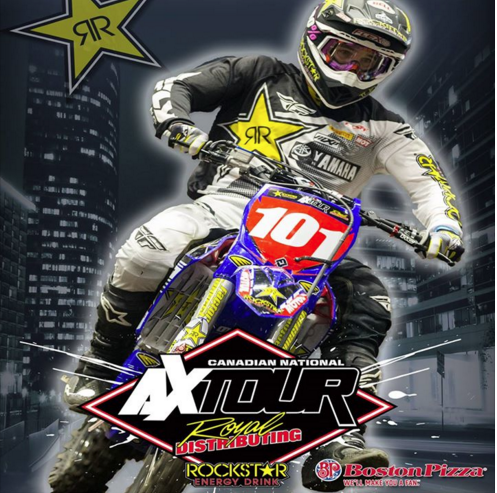 Submitted.  Jetwerx is pleased to announce the two new additions to The Canadian National Arenacross Tour.  First round of the series will kick off just East of Montreal, QC in the City of Saint-Hyacinthe, where we will be racing at the Centre BMO on September 23rd 2017. The western swing of the Tour will pick up another round at the amazing Abbotsford Center. The event will take place just east of Vancouver in the beautiful city of Abbotsford, BC, on Saturday November 4th 2017.

“We are excited to add another round of Arenacross in BC; the riders, families and fans are simply amazing. We have had great response in that area, and we are looking forward to building a long term relationship with the Abbotsford Centre for many years to come.” Kyle Thompson – Jetwerx Inc.

“We are extremely excited to host for the first time ever at the Abbotsford Centre, the Canadian National Arenacross Tour this upcoming November. The Axtour is a first-class event and we are thrilled to be able to work with the team at Jetwerx to bring this exciting world class competition to fans right here in Abbotsford and the Fraser Valley.” stated General Manager, Andrew Nash.

Along with the addition to the two new venues for Arenacross, the Jetwerx crew will be heading back to the original ground breaking stop in London, Ontario at the Metroland Media Agriplex. The London location was the original stop for the Tour back in 2015, and will once again be part of the Eastern swing, replacing the unique Sarnia Hiawatha Horse park round. The event at the Metroplace media Agriplex will take place October 7th 2017.

With the additions of the new rounds, the Championship will be a 6 round series running from September 23rd to November 11th at the Series Final in Calgary, Alberta. The AXtour Series will continue to be split into East and West Amateur championships, as well as the NEW format for 2017 and beyond, the AX Lites Pro class will crown a East and a West Champion.

“We want to put more emphasis on the transition from Amateur to Pro, and give these kids something to shoot for. By giving the Amateur riders much deserved prestige to race and win the Championship in their respected class, and having the AX lites Pro class as a building block series, to groom our next generation of elite Pro’s. This will give riders such as Tanner Ward, Casey Keast, and Jacob Picciolo something to bridge the gap between racing the Amateur and Pro.” Kyle Thompson- Jetwerx Inc

As the Canadian National Arenacross Tour / CMA / FIM North America Arenacross Tour rolls on into its third full season the anticipation is growing with more teams, more riders, more sponsors, and more fans all waiting for the first gate drop September 23, 2017. Full details and the complete schedule will be released in the coming weeks so stay tuned.