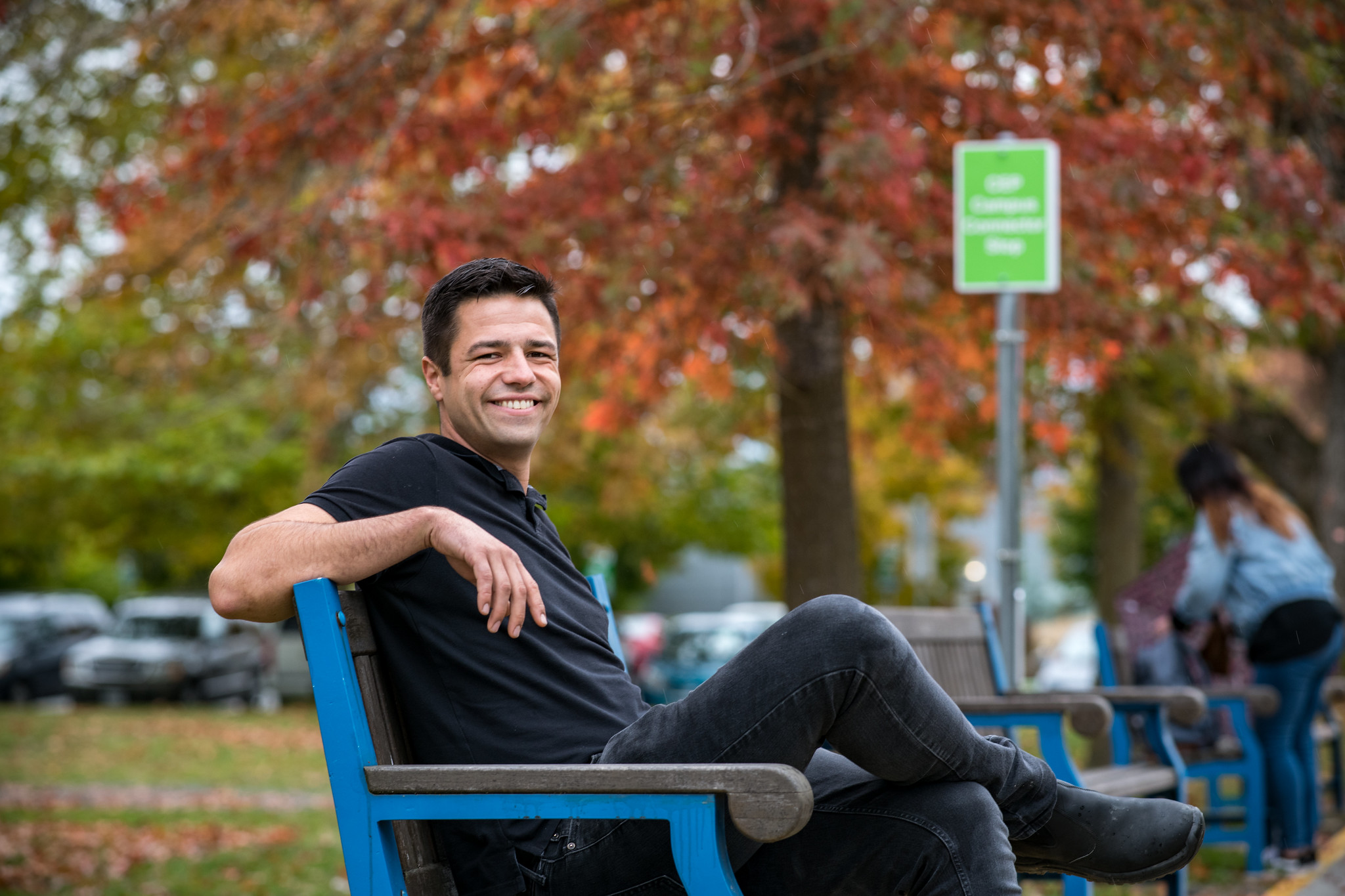 Wegenast advocates with passion for homeless and marginalized

Jesse Wegenast leads with love and compassion in all that he does. As a pastor with 5 and 2 Ministries and a resource person with Archway Community Services who serves as an intermediary for those who are unhoused, poor, mentally ill, aged, and struggling with addictions, Wegenast’s actions have had a profound impact, helping to reshape conversations around support, public space, addictions, and the lack of accommodation (both social and physical) for Abbotsford’s most marginalized populations.

For his extensive and wide ranging community work, Wegenast has been chosen as the winner of UFV’s Young Distinguished Alumni award for 2019.

Wegenast earned his BA in Geography at UFV in 2012, but even before graduation he was organizing free meals for Abbotsford’s most marginalized citizens in Jubilee Park.

“I have always felt a pull toward helping people in need,” says Wegenast, who grew up in Greendale, part of Chilliwack, and attended Sardis Secondary. “Even while I was a young adult, I started just talking to the people living under an overpass in Chilliwack, getting to know them better.”

He has spent the past decade as one of Abbotsford’s leading advocates for the rights of the homeless and those dealing with addictions.

Over the past 12 years he has led many volunteers along in serving the community with the 5 and 2 Ministries. He has served as coordinator for the Abbotsford Homeless Count, and took the lead in the development and implementation of Abbotsford’s Extreme Heat Response protocols.

In 2017 he worked to create BC’s first age-specific shelter for adults after identifying a community need in the 50+ year-old population. As part of a program funded by BC Housing, he serves as the director of the shelter and oversees a staff composed almost entirely of individuals receiving Persons With Disabilities benefits.

As part of the multi-agency group Supporting Wellness and Reducing Harm (SWaRH) he helped establish harm reduction services in Abbotsford. Working with the Abbotsford Division of Family Practice and the Woman’s Resource Society he successfully secured funding for a post-assault care nurse practitioner.

Wegenast also gives back to the UFV community, as a guest lecturer and resource person for students and faculty in Nursing, Geography, and Social Work. Today, in addition to his work with the 5 and 2 Ministries, he is an autism support worker, and recently started a small chicken farm and business. This past summer, he also launched the Cultus Lake Flower Festival from his family farm in Yarrow.

His actions have touched the lives of thousands in Abbotsford and the Fraser Valley.

The secret to his success in building bridges between the Fraser Valley’s homeless population and the greater community? Compassion and connection.

“My faith tells me to love thy neighbour as thyself. I believe we have to look out for people if we are in a position to do so,” he says. “I grew up in stable, secure family, but I became aware that not everyone enjoys such stability. The more I got to know people living on the streets, the more I got the feeling that the general public does not know what it’s like to be poor. It’s no wonder that those who are poor often feel absolutely hopeless.”

He found that he was good at being an intermediary.

“People working in the field with homeless and marginalized people are not always well equipped to carry forward to those who could change policy. I found I could use my gifts of communication and empathy to be an advocate for the poor in Abbotsford.”

He credits his UFV education for helping prepare him for the roles he has taken on.

“UFV in particular helped me to understand underlying systemic issues that create social problems, and gave me the tools to begin to address those problems.”

Wegenast and his wife Sharalin (who is a UFV nursing alumna) and their three young children have settled into life on a rural farm shared with extended family in Yarrow.

Never one to take it easy, he is also now a chicken famer and flower festival impresario as well as a professional advocate for marginalized people.

“I figured if we were going to live on a farm I might as well be a farmer along with everything else, so I stared raising chickens. It’s amazing what you can accomplish on the farm between the hours of 6 and 7 am and 9 and 11 pm.”

The flower festival grew out of a compulsion to grow plants.

“It’s something really nice to come home to at the end of a long work day.”

Hundreds of visitors enjoyed visiting his gardens and taking in the varieties of sunflowers as well as dahlias, zinnias, black-eyed susans and delightful wildflowers.

As for being named UFV’s Distinguished Young Alumni for 2019?

“It’s absolutely an honour. I don’t do things for acknowledgement, but it was very nice to be recognized. And I’m honoured that it was geography professor Michelle Rhodes who nominated me because I am a great admirer of her.”