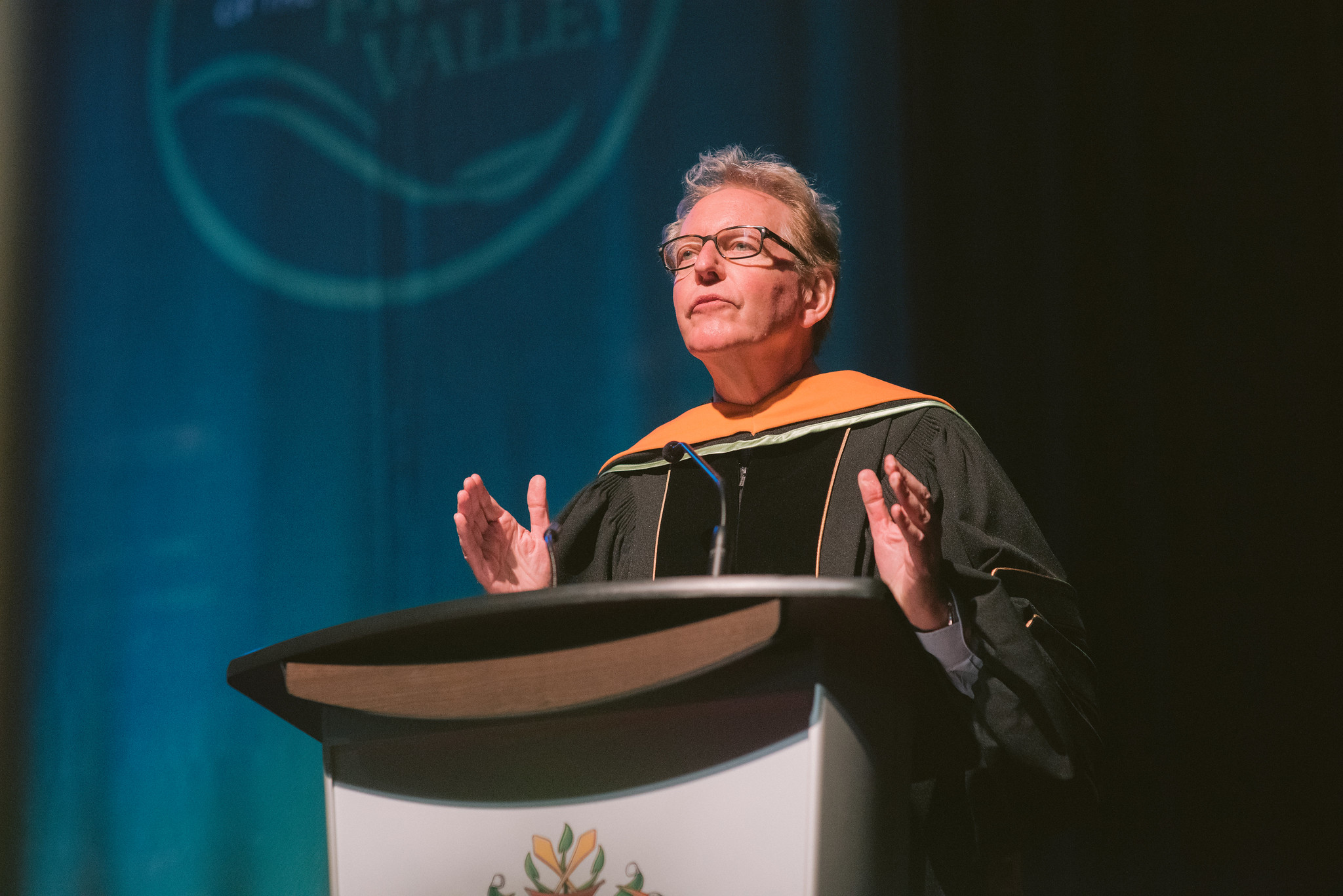 Anthony von Mandl is an entrepreneur whose visionary efforts to transform British Columbia’s Okanagan Valley into a world-class wine-producing region have enhanced the reputation of Canadian wines and made the Okanagan a premiere tourism destination.

In recognition of his extraordinary accomplishments in winemaking, agriculture, tourism, and economic development, von Mandl will receive an honorary Doctor of Technology degree from the University of the Fraser Valley at its morning Convocation ceremony on June 4, 2019.

The ceremony takes place at the Abbotsford Centre starting at 9:30 am and the public is welcome.

Born in British Columbia to European parents, von Mandl began his career in Vancouver as an independent wine merchant at the age of 22.  Despite difficult initial years, he successfully grew Mark Anthony Wine Merchants, and in 1981 began to realize his audacious dream: to produce world-class wines in British Columbia’s then unknown Okanagan Valley.

It took until 1994 when Mission Hill Family Estate won the trophy for ‘Top Chardonnay Worldwide’ at the International Wine & Spirit Competition in London that he knew his dream had legs.  Mission Hill Family Estate, which Anthony conceived and built to endure for centuries, has become internationally known and heralded as “the gold standard of wineries” by Condé Nast Traveler and “the Versailles of the Valley” by The New York Times.

After winning ‘Canadian Winery of the Year’ for the sixth time, Mission Hill Family Estate recently stunned the wine world by winning ‘Best Pinot Noir in the World’ in London at the Decanter World Wine Awards, the world’s most significant competition with over 14,000 wines entered, putting the Okanagan Valley on the international Pinot Noir map. With this the time was right to build Martin’s Lane Winery, the most radical Pinot Noir winery in the world.  Architecturally stunning, the 6-level gravity-fed winery is carved into a steep vineyard hillside and the winery is named in honour of Anthony’s late father, Dr. Martin von Mandl.  The inaugural vintage of Martin’s Lane was awarded an unprecedented 97-points.

Anthony’s CheckMate Artisanal Winery, which he created to harness the effects of climate change to make high-end Burgundian-style Chardonnay, has just been awarded a perfect 100-point score, the first ever for a Canadian table wine. The 100-point 2015 Little Pawn Chardonnay is available only at CheckMate Artisanal Winery, where visitors have a rare opportunity to taste these wines at ‘The Installation’, an innovative ‘pop up’ tasting room designed by Seattle-based architect Tom Kundig.  Currently in construction is a brand new contemporary winemaking facility, tasting room and members’ lounge that will completely transform the winery into a work of art on its own.

In 2016, von Mandl was appointed as an Officer of the Order of Canada, the country’s highest civilian honour, and he is also the recipient of the Order of British Columbia; both honors recognize his innovative contributions to enhancing Canada’s international reputation in the wine industry.

A former YPO International board member, von Mandl has served on the advisory boards of the University of Western Ontario and the University of British Columbia. In 2011, he was the co-recipient of the Warren Bennis Award for Leadership Excellence alongside A.G. Lafley, CEO of Procter & Gamble. Previous winners include Mikhail Gorbachev, Benazir Bhutto, and Howard Schultz of Starbucks. In 2015, he was inducted into the Canadian Agricultural Hall of Fame. He is also the chairman of The von Mandl Family Foundation, supporting cancer research in Canada and the United States.

Anthony von Mandl’s passion and willingness to take risks to transform the Okanagan Valley exemplifies the pioneering spirit the University of the Fraser Valley aims to foster in its students in the Faculty of Applied and Technical Studies and Faculty of Science.  It is a privilege for Anthony to be awarded an honorary Doctor of Technology degree from Dr. Andy Sidhu, Chancellor, and Dr. Joanne MacLean, President and Vice-Chancellor of the University of the Fraser Valley.