By The EditorOctober 16, 2019Arts, Community, Print Edition
No Comments

Canadians have a rich history in aviation and the stories of their adventures are amazing. The story of bush pilot Elizabeth Wieben is an entertaining look at some of her time flying in the far north of Ontario. 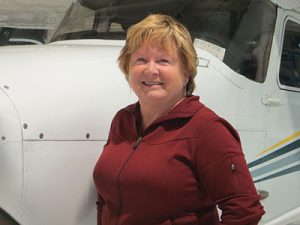 Photo is of Elizabeth Wieben, now retired
in front of her own personal airplane in
2002. Courtesy Al Neuman

Elizabeth Wieben was 17 when she earned her pilot’s license. The beginning of Liz’s flying career, like so many, was flying bush planes in the far north of Ontario. At 19, at the controls of a Beaver aircraft, she had the job of flying mining engineers into remote lakes north of Thunder Bay for their surveys.

On one particular morning she was asked to fly in a 15-man survey crew to Carib Lake. Before landing, Liz circled very carefully over the water and noted the many large rocks jutting out of the lake. She landed safely and the engineers set off into the bush for their day’s work. Liz would came back in the evening to return them to camp.

For her take-off, Liz moved slowly out from the dock when suddenly the right side of the plane heaved up and became stuck on a rock that was just under the surface of the water. Liz shut down and got out on the float to take a look. Having been previously stranded in the bush, Liz discovered quickly that getting wet meant spending miserable hours in wet clothing. She decided the smart thing to do is take her clothes off. She threw her clothes into the rear of the plane and with just her heavy socks and work boots, Liz positioned her shoulders between the two spreader bars above the floats and started to heave using the bars as a pivot point.

She heaved and heaved and heaved. Slowly, ever so slowly, she managed to inch the float off the rock. For a five-foot-two woman to move a Beaver aircraft off a rock is nothing short of a miracle. Before Liz could enjoy the moment of her accomplishment, the plane began to sink. Liz jumped into the cockpit and fired everything up.

On full throttle, the plane refused to move with Liz knowing the float is filling up with water and she was in big trouble. Then, slowly, slowly the Beaver began to move but was just wallowing in the water. As the plane was moving at 35 miles an hour, Liz realized she was just about at the end of the lake with trees ahead. With much skill, Liz put both feet on the left rudder and skidded the Beaver around a 90-degree turn, picked up more speed and got her airborne.

Liz was now at 7,000 feet in the air with a big hole in a float and no clothes on. She decided to get on the radio to see if she could get someone on the air. Luckily a pilot she knew flying a hundred miles north of her responded “Hi Liz,How is your day going? Need some help?”

After explaining that she had holed a float, he suggested that she bring the plane to his base camp where he had beaching gear and a mechanic to repair the float for her. She checked her fuel gauge, checked the compass and set a heading for his base camp.

But now she had another big problem to solve. She just could not image the level of embarrassment she would encounter landing her plane nude at his “men only” base camp.

She had to figure a way to get her clothes from the rear of the plane. Liz decided to trim the controls to put the nose down and get into a slight dive, then she ran back and grabbed some of her clothes.

While she was doing this, the nose came up and the airspeed was decreasing. Liz grabbed the controls, trimmed to a level altitude and put on some of her clothes. A second effort she retrieved the rest of her clothes and finally Liz was dressed again. She put on her lifejacket and undid her boots so she could slip out of them in case the plane sank in the landing. She landed on one float, kept the other float out of the water and ran it right up on the beach. Later in the day the float was fixed and she flew back to Carib Lake to pick up the miners. They had no idea what kind of day Liz had and she wasn’t about to tell them.