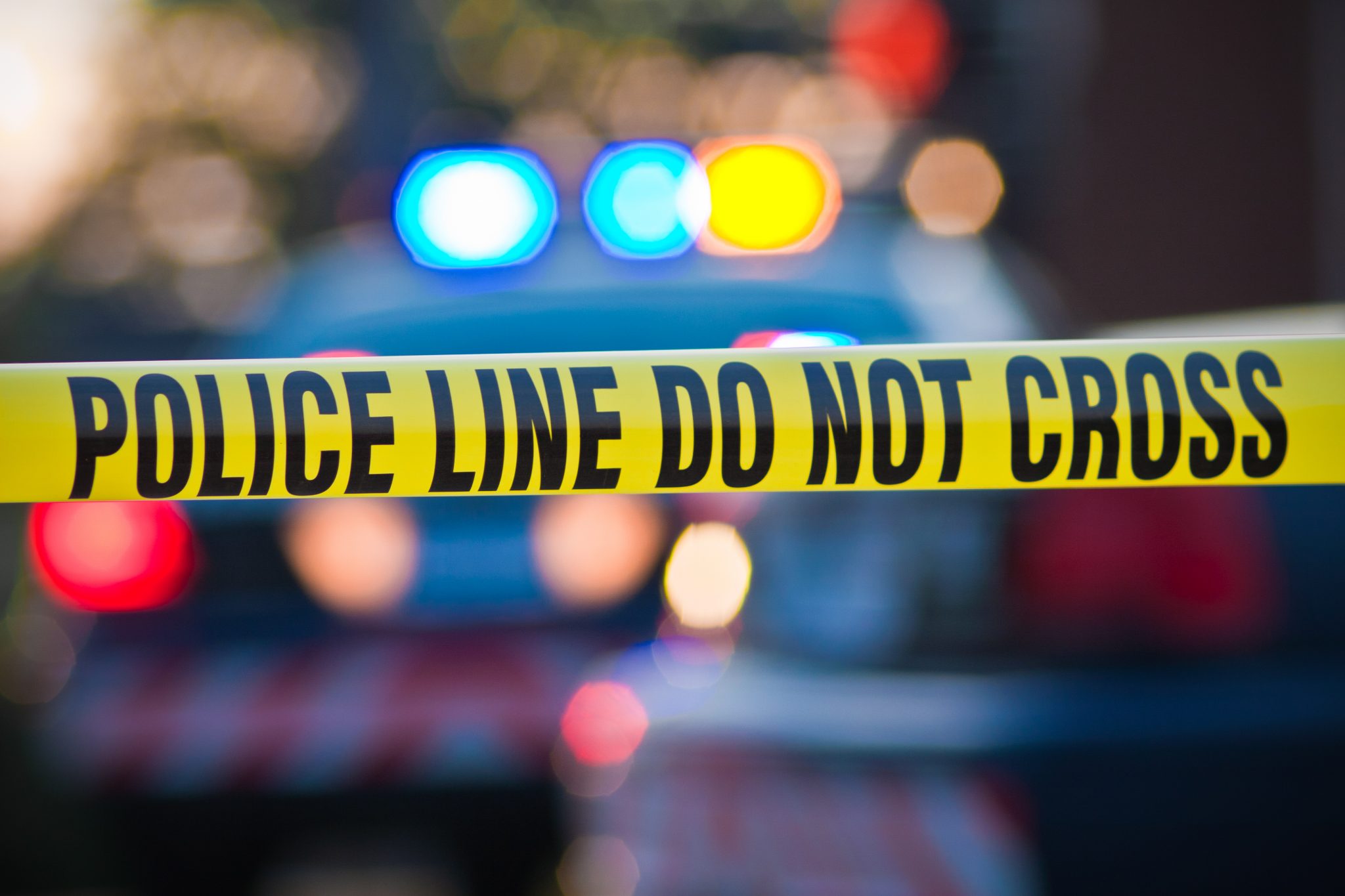 Policing, Crime Rates, Your Safety and Quality of Life… It’s Better Than You Think!

By The EditorJanuary 5, 2020Issues, Opinion, Print Edition
No Comments

If you watch the news, or follow any media, it seems that the world is full of crime, danger and hate. The truth is that it is just the opposite. This column presents the facts and then translates what the real statistics on crime mean for the future of the Abbotsford.

There is one undeniable fact about crime in Canada…over the last 35 years, the number of reported incidents have trended down. Even with a slight uptick in the last 2 years, we are still at crime rates that equal those of the 1970’s.

But what does that mean?

We get blasted on a daily basis with stories of violent crime, home invasions and robberies. The truth is that the news media thrive on those stories. Recall the old media trope “If it bleeds, it leads”.

With access to stories and data more readily available because of the internet, each violent incident is picked up and reported on in ways that were historically not available. For example, just last week, a horrible murder of a teen outside their school was reported on nearly every single media platform available to a human being. 30 years ago, it would have been reported by the local newspaper, radio and TV news, but it may not have made it onto the national news media.

So, our perception of vlolence all around us correspondingly goes up. Even though this incident was in Hamilton, Ontario, the media make us feel like it could be us next, or that it was right next door.

Now, don’t get me wrong. Violence occurs all over. We have certainly had our fair share here in Abbotsford. On many an occasion, we have been labeled as the “Murder Capital of Canada”, but even the statistics that support that moniker are circumspect. We’ve never actually had the most murders in Canada, just the most per 100,000 of population.

Let’s look at the raw numbers and do some comparisons. To begin with, in Figure 1 we can see the overall downward trend in crime rate. This trend is even more effective due to population. What I mean by that, is when our population was much smaller, people didn’t live as closely packed as they do today. 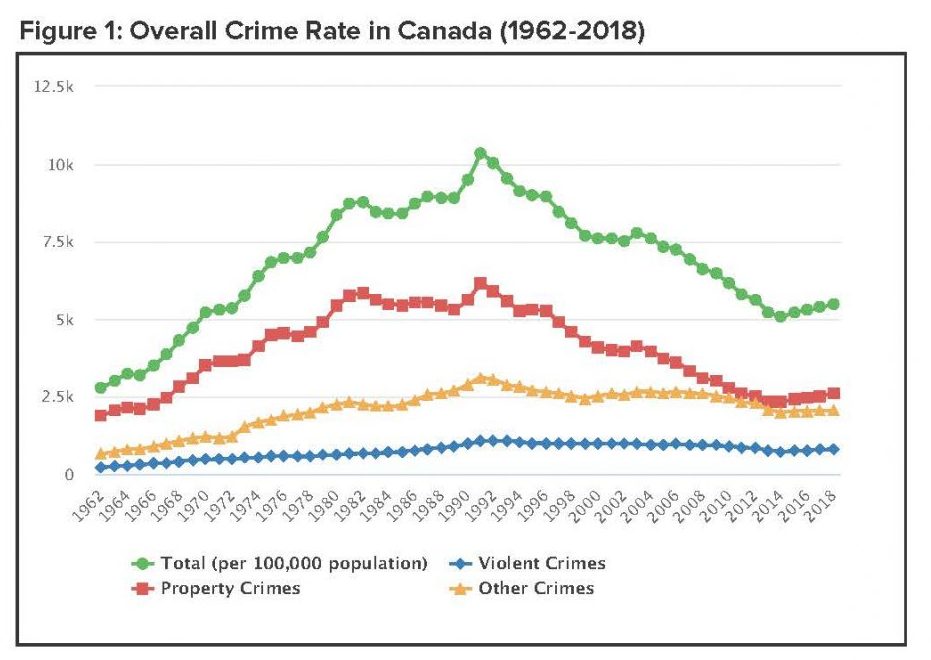 Crime concentrates around urban areas and so, as those areas get bigger and populations densify, crime rates go up. So, as our crime rate goes down, it also goes down against the population trend. In other words, people are generally more and more well behaved. This holds especially true for major crimes like murder.

As you can see on Table 1 from the previous page, Abbotsford does not have a many more murders than anywhere else. Additionally, with a few notable exceptions, a large portion of our murders are gang related. 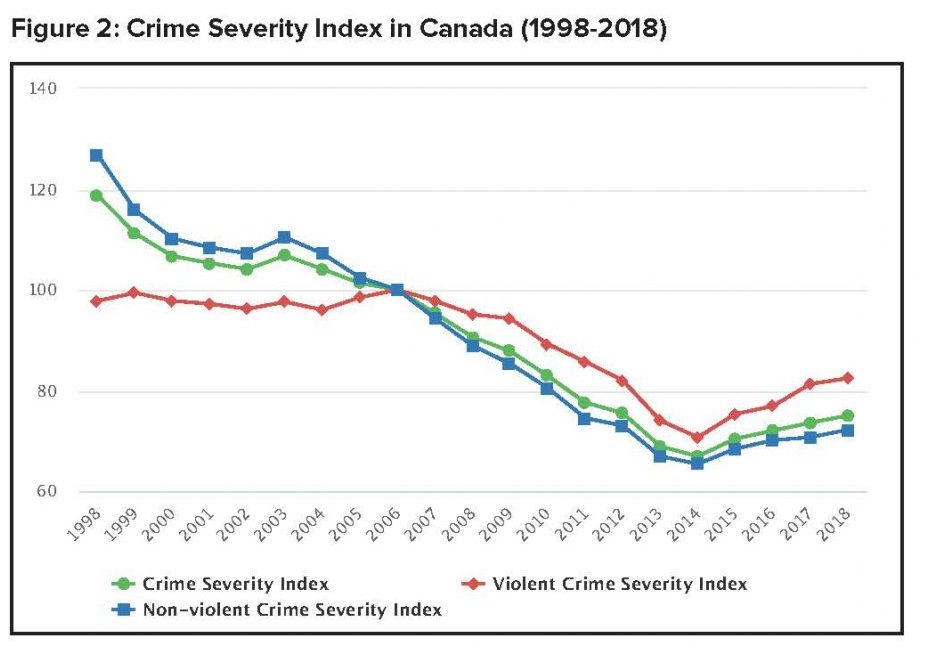 We can follow this decreasing trend in all crime in Figure 2 where we see an a downward trend in the Crime Severity Index. This index is a good indicator of how much safer our communities are. As you can see, this is across Canada, and when we drill down into Abbotsford, our city is leading the downward trend by dropping below both National and Provincial averages in most areas of crime. 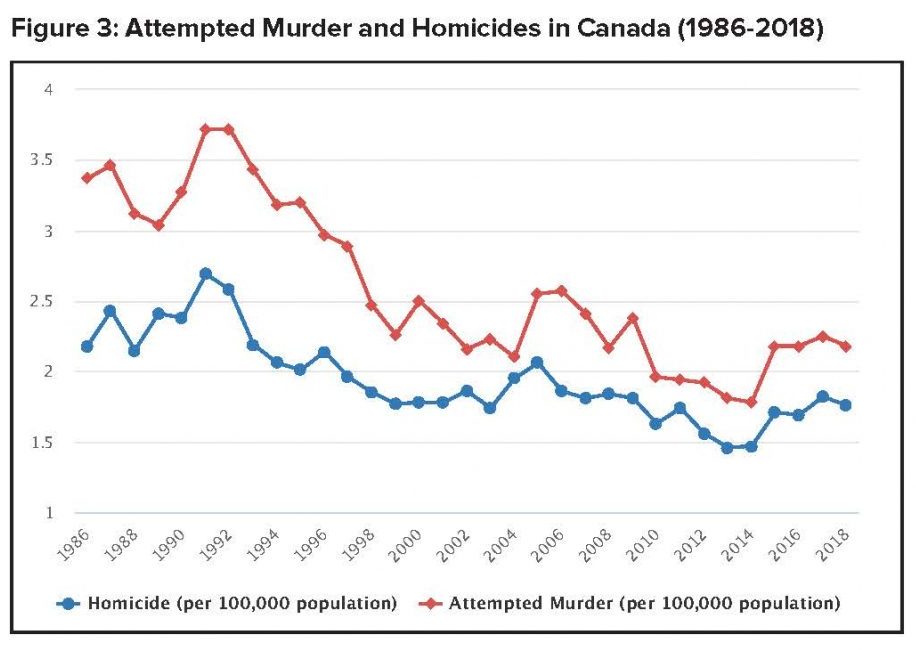 It seems that education is the key lower crime rates. As we educate our children to the consequences of their actions, and show them that a life of crime will simply impede them from the life they really want, crime ceases to be an option. This is apparent in Figure 4 on Youth Crime. 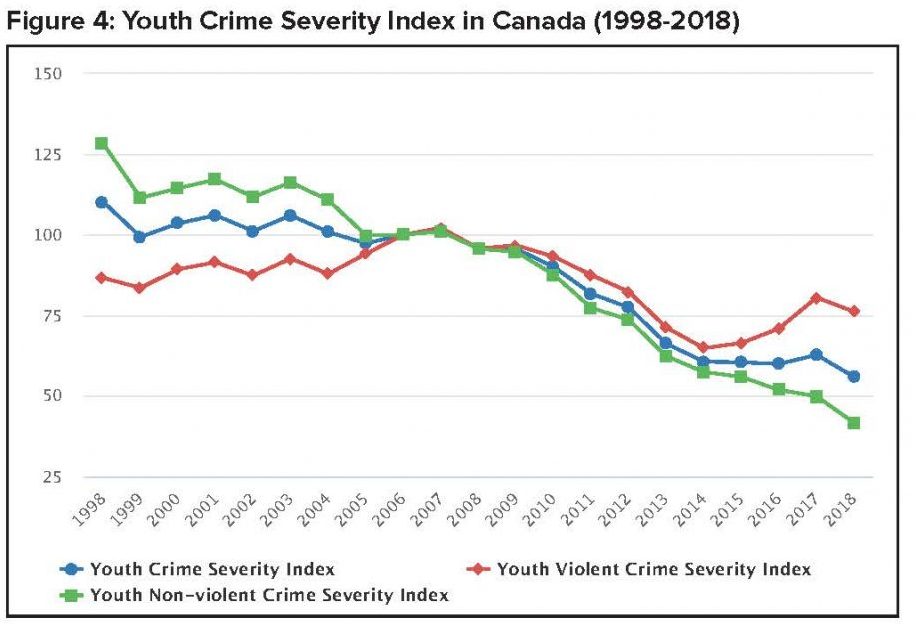 It is important to note that the raw numbers matter here. In Figure 4, approximately 40 non-violent crimes are occuring per 100,000 youths. In Abbotsford that translates to only about 55 incidents per year. Think of that in perspective. In this entire city, over the course of a full year, Abbotsford youth committed only 55 non-violent crimes. Only 20 years ago, that number was more than double. So, why am I telling you all this?

Simply put, it is because statistics and facts like these must start to inform out public policy.

Every year it seems, the City of Abbotsford receives a new request for more police officers, a new police building and more and more budget. In a recent USA Today article (usatoday.com Feb 12, 2019) experts say there is little evidence that more cops mean less crime.

In fact, most increases in police numbers occur only after a rise in crime. Since crime is falling, experts agree that it is the scheduling and deployment of officers that is critical, not the addition of new ones.

New York is a shining example of a city making a conscious decision to reduce the number of officers on its police force, and yet crime continued to go down. James McCabe, a retired New York Police Department official who travels the country as a police staffing consultant, said “It’s not what you have, it’s what you are doing with them.”

The NYPD’s staffing is based on “workload allocation models” which are time-consuming and require statistical skills most police departments lack. However, with the City of Abbotsford facing more requests for officers, and more than $60 million for a new police building to house them all in, perhaps putting resources into the science of staffing will serve our city over the long run much better than a new police building.

I think it can be boiled down to “work smarter, not harder”. I’m sure our friends at the APD will agree with that sentiment, and we can rest easy knowing that we are safer than we have ever been, and we might save a tax dollar or two as well!