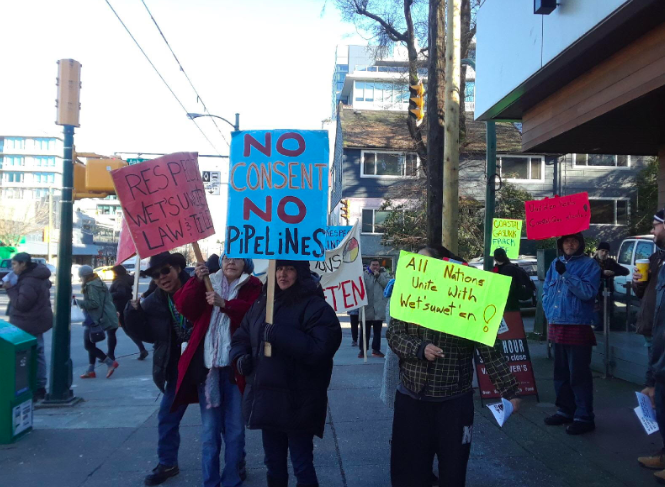 By The EditorFebruary 5, 2019February 20th, 2019News & Politics, Provincial
No Comments

As a large group of urban Indigenous activists and supporters marched to the Provincial Environment Minister George Heyman’s constituency office, Heyman and his staff cowered behind locked doors and refused to engage with the group. Chanting “Heyman you can’t hide, your pipeline is genocide!”, the group demanded a firm commitment from the NDP to oppose Coastal GasLink Ltd.’s attacks on Unist’ot’en territory.

CGL bulldozers are currently clearing the way for a man camp in preparation for a controversial pipeline project. The unauthorized activity is destroying traplines in violation of the Wildlife Act and ignores the legal requirement to complete an Archaeological Impact Assessment prior to any work commencing. Burial and cultural sites in the area are at high risk of irreparable destruction.

Neither Dini’ze and Tsake’ze (Hereditary Chiefs), the BC Oil and Gas Commission, BC Environmental Assessment Office, nor the BC Archaeological Branch were consulted by Coastal GasLink.
The company is in violation of the conditions of its construction permits yet to date neither the RCMP, senior officials nor the responsible ministers have taken steps to enforce the law with regard to CGL.

The Indigenous people and supporters declared their intention to maintain unrelenting pressure until Minister Heyman fulfills his responsibility as Minister of the Environment and orders Coastal GasLink to cease and desist all work in the area in violation of both provincial and Anuc niwh’it’en (Wet’suwet’en law).