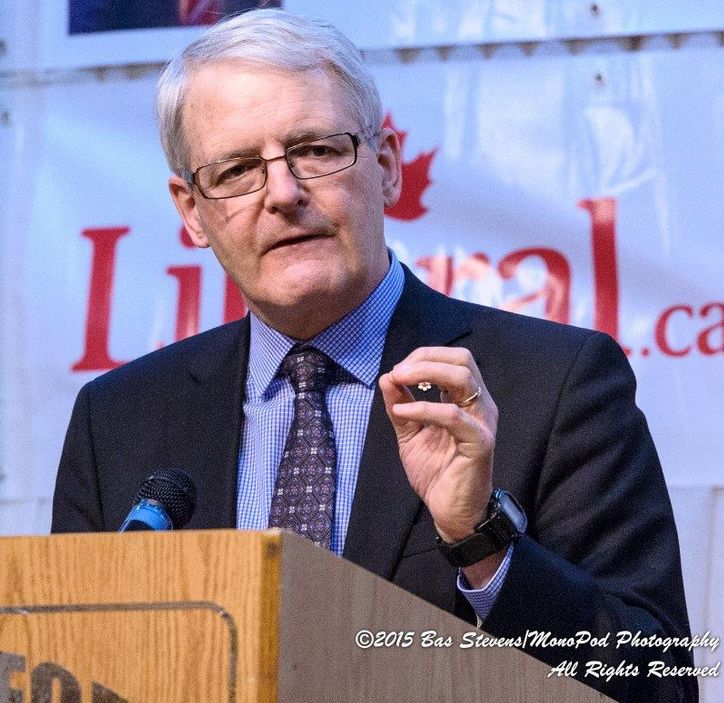 By The EditorMarch 8, 2015September 28th, 2018Uncategorized
No Comments

By Mike Archer.Liberal MP Marc Garneau was in Abbotsford Saturday night and he spoke of the need for political change in Canada to a full house at the Abbotsford Banquet and Conference Center.

Garneau was in Abbotsford to speak at the event; a fundraiser for Jatinder (Jati) Sidhu the Liberal candidate for the new riding of Mission/Matsqui/Fraser Canyon.

He told the audience that, if elected, the Liberals would ensure a proper procurement process was put in place for the Lockeheed-Martin f-35 Lightening aircraft which has been sitting in limbo since the Conservative government of Stephen Harper first underestimated the cost by more than half. The project has yet to get off the drawing board and Garneau said a Liberal government would tackle the issue head on.

Jatinder Sidhu
Sidhu immigrated to Canada with his wife Surinder in 1974,initially settling in Mission where his three children were born, before moving to Abbotsford.

Sidhu owns a number of local businesses, and is the founding member of the Fraser Valley Indo-Canadian Business Association, where he continues to focus on projects of diversity, intercultural understanding and celebration.

Acccording to the Liberal Party of Canada website, “Sidhu has continuously sought ways to give back to the community; he has been on the University of the Fraser Valley board of governors, the Asia Pacific Market Advisory Committee, the BC Multicultural Advisory Committee, the Abbotsford Police Board, the Fraser Valley Cole Co-op Association, the Abbotsford Agrifair Board, and the Abbotsford Chamber of Commerce.”
Homelessness
For his part, Garneau is a strong proponent of the Housing First strategy for helping homeless citizens and spoke to Abbotsford Today about the many ways in which the federal government can help.

“You know the Homeless Partnering Strategy was a Liberal initiative,” Garneau said, adding that the program would receive a much higher budget if the Liberals are elected.

Garneau has been very active in fighting for the homeless in Montreal. He has been the MP for the riding of Westmount—Ville-Marie since 2008.

“What we have learned is that, if we provide people with a safe place to live they stand a much higher chance of following up with the life changes necessary to battle problems such as drug addiction, alcoholism and mental health,” he said.

Garneau said it is unfortunate more municipalities and service providers aren’t aware of the Homeless Partnering Strategy, which, despite the fact it was continued by the Tories has not been a priority of the current government.

“We need to make sure the program is better known and understood by communities across the country. Homelessness is not going away. We took the lead on the issue back in the 90s but we need to revitalize the program and ensure more people know about it,” he said.

Garneau emphasized that when the program started, it was based on working in partnership with local councils, orgranizations and community groups to fund solutions that work. He says the program has been underfunded by the Harper government which may be one reason not many municipal councillors know about it.

The Underfunding of Homelessness

“Year after year, I join RAPSIM at rallies in Montreal and Ottawa, demanding that the federal government provide more funding to the Homelessness Partnering Strategy program and ask the government to recognize the continued need for a general fund that can respond to Montreal’s population of homeless.”We stand in solidarity with the men and women who are homeless and with those who care for the homeless. As the federal MP for Westmount Ville Marie it is my role to defend the homeless and fight for resources to afford you the human dignity and protection you deserve.

“The minister of Human Resources and Skills Development, Ms. Candice Bergen, has cut back and revised programs, often with little regard for the people these programs intend to serve. The results have undermined the viability of services that many citizens assume will be protected, as without them there are no other options.” – MP Marc Garneau at the Sept 11, 2014 protest against the lack of funding for the homeless.

More on the Homelessness Partnering Strategy from the Conservative government’s ‘Economic Action’ website.

$600 million over five years starting April 2014 to renew and refocus the Homelessness Partnering Strategy using a Housing First approach. The Housing First approach involves giving people who are homeless a place to live, and then providing necessary supports to help them stabilize their lives and recover. As demonstrated by the Mental Health Commission of Canada’s At Home/Chez Soi project, the Housing First approach is an effective method to reduce homelessness and help those with mental illness. Through the Homelessness Partnering Strategy, the Government is implementing the Economic Action Plan 2013 commitment, and continues to work with communities, provinces and territories and the private and not-for-profit sectors to find flexible and effective ways to respond to homelessness.

The HPS seeks to address homelessness by working in partnership with communities, provinces and territories, other federal departments and the private and not-for-profit sectors. Through its community-based approach, the HPS provides communities with the flexibility and tools to identify and address their own distinct homelessness needs and priorities. HPS funding is invested in local priorities identified by communities thorough a comprehensive community planning process involving a range of local stakeholders.