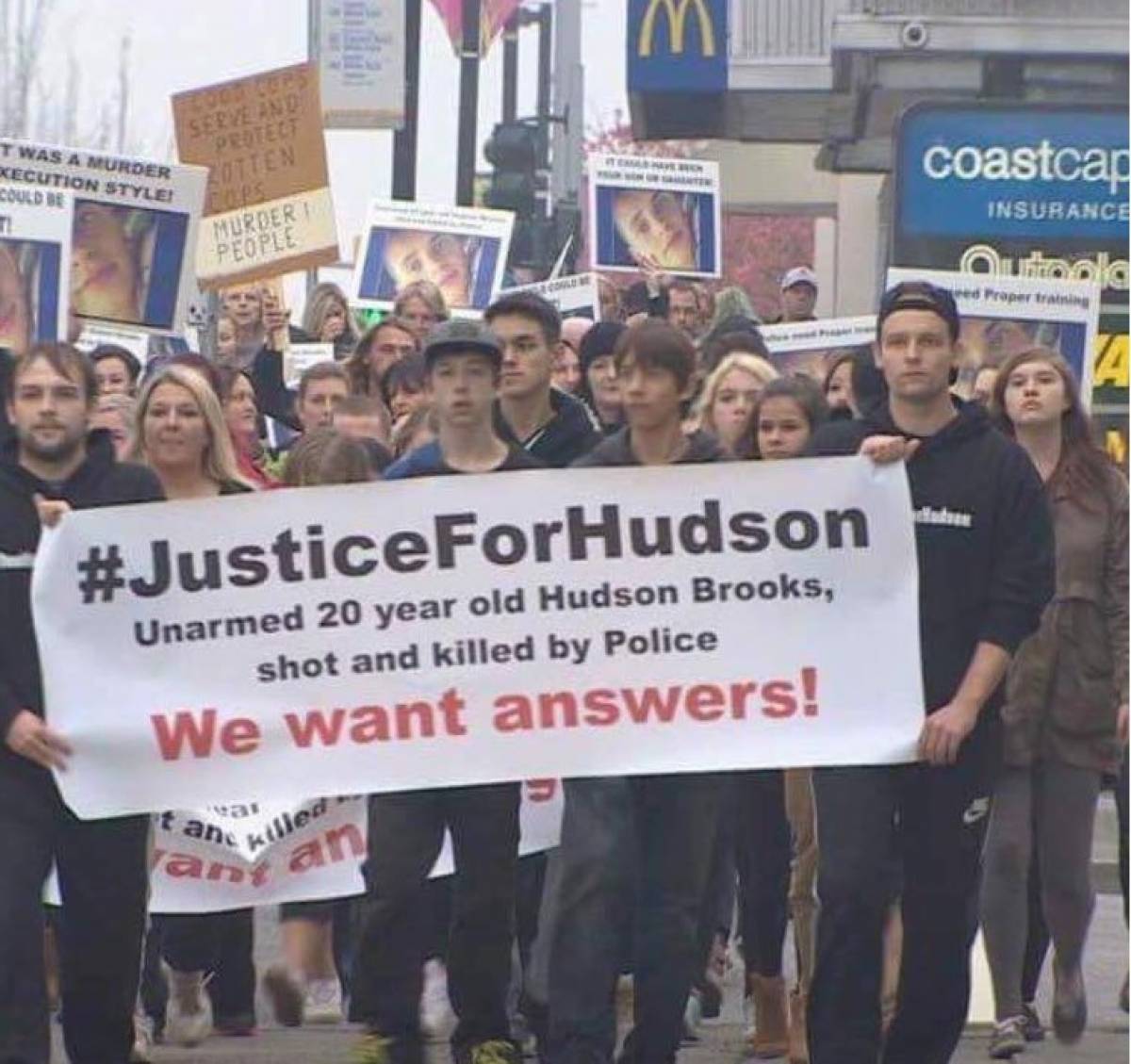 Hudson Brooks Decision Offers No Closure For Parents…and No Recourse

By The EditorAugust 7, 2020Crime
No Comments

Submitted by BC Wrongful Death Law Reform Society  – For over five long years, there has been no peace, no closure, and no justice for the Brooks household. On July 18th, 2015, their son Hudson was taken from them by an RCMP officer after being shot nine times (of 12 shots fired). Since then, their life has been in upheaval due to court appearances, marches, vigils, peaceful protests, and the emotional distress caused by the loss of a child. The Brooks are still fighting for the answers and justice they deserve. Although Hudson was killed years ago, the ramifications are seemingly unending, and the wound is still fresh. Ms. Brooks describes the feeling as though it was “yesterday that it happened, and forever since [she has] seen him.”

For most of this time, the Brooks have had no power under the law to seek justice for their son. They were left in the dark for months while the Independent Investigations Office (IIO) proceeded with their investigation. During this time, they did all they could to get the answers and the help they so desperately needed. They launched the #JusticeForHudson campaign, and rallied their neighbours and community to “fight to get justice for Hudson”.

After a 15 month investigation, the IIO recommended that charges be considered against the officer responsible for Hudson’s death. However, it wasn’t until December of 2017 that charges for aggravated assault and assault with a weapon would be laid, and the preliminary trial wouldn’t start until November of 2018. This would be the first time that the Brooks family would hear the details of what happened that night.

Over three years later, Ms. Brooks would have to relive the trauma as she listened on in horror. According to witness testimonies, Hudson was unarmed, shirtless, and in need of assistance due to the night prior. The perpetrator seemed to be remorseless and showed a crass disregard for human life. It is reported that she cracked jokes about not getting her transfer and how she should have used her taser. Instead, Hudson – who had not been restrained or resisted arrest, and who was shot without warning – lay dying as those responsible remarked on how they should have and could have handled the situation differently.

In December 2018, the preliminary trial was followed quickly by a decision to move the case up to the Supreme Court. This decision was met with elation and gratitude for the people who stood behind Hudson in the fight for justice. However, the victory was not to last.

In September of 2019, a decision made by the BC prosecution ripped open a five-year-old wound. It was as if Ms. Brooks had “lost Husdon all over again”. The charges laid against Const. Cucheran were stayed by the Crown for dubious reasons, citing outdated psychological conditions not recognized by the current Diagnostic and Statistical Manual of Mental Disorders (DSM-5), leaving the Brooks family with no recourse within the criminal justice system. The only other option to obtain #JusticeForHudson would be to take the matter to trial in a civil courtroom. However, because Hudson had no dependents at the time of his death, the potential costs of this option outweigh the possible benefits.

BC’s antiquated wrongful death laws ensure that it is impossible to hold those responsible for the death of a person with no dependents liable in civil court. The result is no accountability for those whose negligent and malicious behaviour results in significant suffering and loss.

Hudson’s supporters now have no path forward to obtain justice because, although to his family his life may be priceless, under the law he is worth nothing. BC is the last province yet to update its wrongful death legislation, which provides compensation to families who lose loved ones under unpleasant circumstances like the Brooks.

Without an alternate path for recourse, many who are exposed to tragic events similar to this will be left helpless, and nothing will be changed to prevent these kinds of acts from happening in the future. Ms. Brooks worries about the kind of message that this injustice sends. Those who would and should be held accountable for their actions are able to get off scot-free, due to the BC government’s inability to serve its people. How many more like Hudson will we have to hear about before we decide to make a change?

We at the BC Wrongful Death Law Reform Society are hoping to make an impact in the lives of those affected by BC’s refusal to update this antiquated legislation. Our organization is operated entirely by volunteers passionate about working towards a more just society.