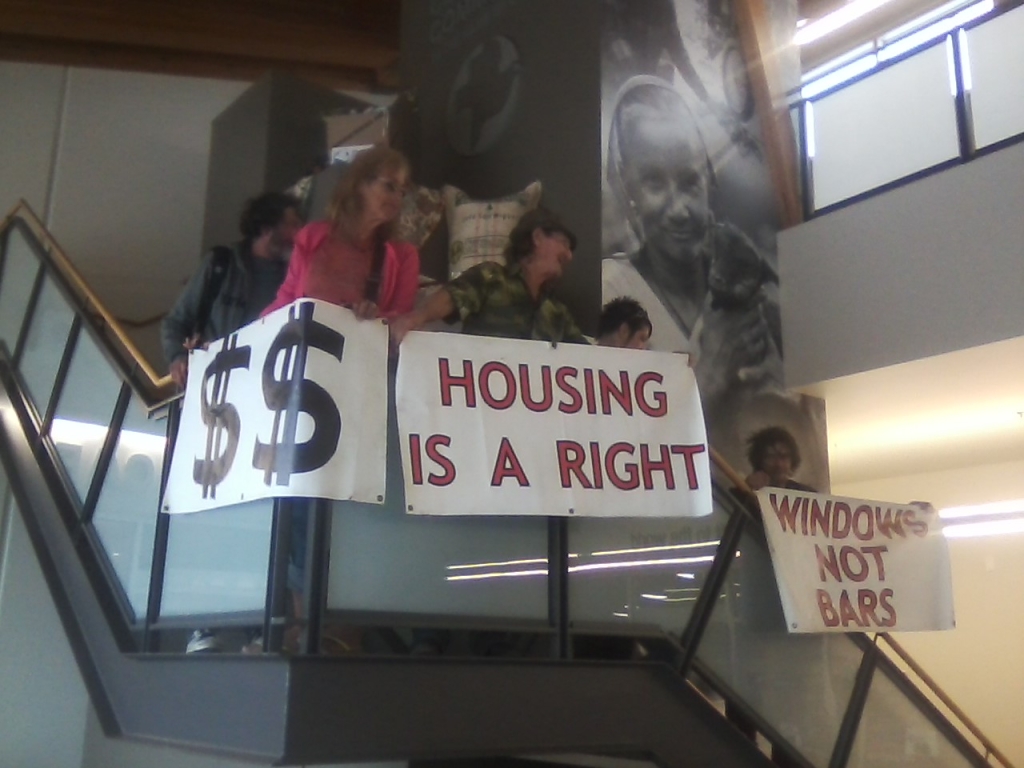 Abbotsford, BC 22/4/2015 – This week the Abbotsford Chapter of the BC/Yukon Drug War Survivors (DWS) launched a major three-pronged initiative to draw attention to the plight of the homeless in Abbotsford.

The DWS is focusing its attention on all Canadian Federal MPs, the Mennonite Central Committee (MCC) a national religious organization with regional offices in Abbotsford, and the provincial Ministry of Social Development and Social Innovation which is responsible for welfare payments and services.

A letter was sent out Tuesday to every Canadian Member of Parliament inviting each of them to come to Abbotsford and speak to the membership of the Abbotsford DWS to learn about the ways in which public institutions such as the MCC, and the Ministry discriminate against the marginalized and vulnerable who, through no fault of their own, suffer from mental illness, addiction and desperate economic status.

DWS founder Barry Shantz says, “This campaign will concentrate on both the MCC’s actions against Abbotsford’s homeless population and the leadership role the MCC has taken in the community in fight against members of the homeless community.”

On Tuesday Abbotsford DWS members gathered in the lobby of the Mennonite Central Committee offices on Gladys Avenue opposite the ‘MCC Dignity Village’ homeless camp to express their objections to the MCC’s role in the Abbotsford Homeless Crisis.

“It is our fervent hope that by inviting Canada’s Members of Parliament to come to Abbotsford and learn what has been done to these people and what continues to be done to them, we can inspire the MCC and the Ministry to take meaningful steps to alleviate the living conditions of the men and women who are victims of homelessness in Abbotsford.

“They can do this by providing financial resources to ameliorate the living conditions at the MCC Dignity Village Camp. We invite them to join the DWS and the City of Abbotsford in a healing process which will establish and build a positive and trusting relationship with homeless people of Abbotsford.”

The DWS has devoted most of its efforts over the last four months to try to avoid the six-week trial with the City of Abbotsford, which is scheduled to start in BC Supreme Court June 29 in New Westminster.

“We have been working hard with the City and have been trying to convince the MCC to get involved in this process since Christmas. We seem to be the only ones at the table trying to avoid a trial,” said Shantz.

“Since the new mayor announced that he did not believe it was smart for the City to be battling in court with its own citizens, we took him at his word and have thrown our lot in with Henry Braun and the new council,” said Shantz.

“However we have heard that the mayor may actually expect the trial, which Abbotsford taxpayers are already paying for, to go ahead. If so, he will also have accepted that it will be appealed, one-way or the other. He seems to have already decided he will ask for help to finance the battle through the appeal process for as long as it takes.” he added.

“This does not sound like a man who wants to get out of court.”

Shantz estimates that the City of Abbotsford has spent upwards of $1 million fighting its homeless population over the last two years and is beginning to feel there is no end in sight.

Re:       Hearing the voices of homeless people

We write to you on behalf of a group of people who have been or are currently homeless. Many of us have slept on the streets, in shelters, and in unsafe and inadequate housing.

We are members of the Abbotsford chapter of the British Columbia/Yukon Association of Drug War Survivors, an organization that is run by and for people who use or have used unauthorized drugs. Our mission is to improve the lives of people who use unauthorized drugs through user-based peer support and education. Our advocacy includes promoting access to safe housing options for our members and protecting the safety and dignity of our members if and when they may be forced to live on the streets.

We have been involved in several legal actions to ensure that our members who have experienced homelessness and others in our homeless community have their rights recognized and protected. We have filed a human rights complaint against the City of Abbotsford for their actions against their homeless population and are challenging the constitutionality of several of the City’s bylaws that effectively make being homeless a crime. Our case will be heard by the BC Supreme Court beginning on June 29, 2015.

We are extremely concerned that the voices and experiences of our most vulnerable citizens are not being heard by our federal representatives. With a federal election approaching, we strongly believe that it is time for Canada to commit to a national housing strategy that is informed by the needs and experiences of people on the street. We are the only G8 country without such a strategy.

We believe in the credo “nothing about us without us.” It is in that spirit that we invite you, and all members of the House of Commons, to meet with us, tour our city, and learn how our national housing crisis is impacting people. We are certain that when you witness the conditions created by the absence of a national housing strategy and hear directly about our needs and vision for social change, you will truly understand the best way forward for Canada.

We look forward to hosting your visit. To let us know when you are able to meet with us, please contact DWS.Abbotsford@gmail.com.

The Abbotsford Chapter of the BC/Yukon Drug War Survivors (DWS) hereby gives formal notice of the following to the Mennonite Central Committee (MCC) at its offices on Gladys Avenue in Abbotsford.

The MCC has allowed individual homeless citizens to be evicted from MCC-owned land without ensuring they had access to shelter or housing.

2) Discriminating Against Homeless Men and Women

Through their leadership and participation in the Abbotsford Social Development Advisory Committee (ASDAC) the MCC failed to include, in policy planning which directly affects their lives, all homeless men and women.

3) Using Exclusion To Define The Homeless

4) Marginalizing Agencies and Organizations Which Do Not Share Its Views

Helping to marginalize or ignore organizations involved in the assistance and treatment of the homeless in Abbotsford for their acceptance and use of national, provincial and Center For Disease Control (CDC) accepted best practices and health policy. Examples would include but not be limited to the 5 and 2 Ministries which the MCC has failed to acknowledge in published media statements.

6) Discriminating Against Women Who Are Homeless

Failing to listen to the needs of women, including their needs for safe, sanitary toilets. These needs have been brought to MCC and have not been properly addressed.

DWS demands the MCC take meaningful steps to alleviate the living conditions of the men and women who are victims of homelessness in Abbotsford by providing financial resources to ameliorate the living conditions at the MCC Dignity Village Camp and joins the DWS and the City of Abbotsford in a healing process to establish and build a positive and trusting relationship with homeless people.

The Abbotsford Chapter of the BC/Yukon Drug War Survivors (DWS) hereby gives the Ministry of Social Development and Social Innovation notice of the following.

The DWS objects to actions and policies which create unrealistic expectations of clients, and, for the active role it plays in creating the conditions which lead to homelessness.

Among the specific complaints the DWS has against the Ministry:

1) Setting Clients Up For Failure

Many of our members cannot meet Ministry expectations with reference to performing a work contract and you are, in effect, dealing with a system which sets you up for failure.

Many of our members have complex issues which need to be considered in their entirety. Individual circumstances are often ignored.

3) Actions And Policies Designed To Deny, Reduce And Disqualify

The system is set up in a way that cannot deal with structural unemployment, mental illness, addiction or abject poverty. It is designed to get people off of welfare by denying or reducing services or payments thus rendering a large number of clients homeless and disqualifying them from benefits.

4) Contributing To And Causing Homelessness

The Ministry’s policies, procedures and actions are significant contributing factors to continuing and growing levels of homelessness.

Income assistance rates have not increased in eight years while inflation and the cost of living continue to rise. This untenable situation makes the lives of those forced to rely on income assistance more difficult and contributes to the growing level of homelessness in the community.