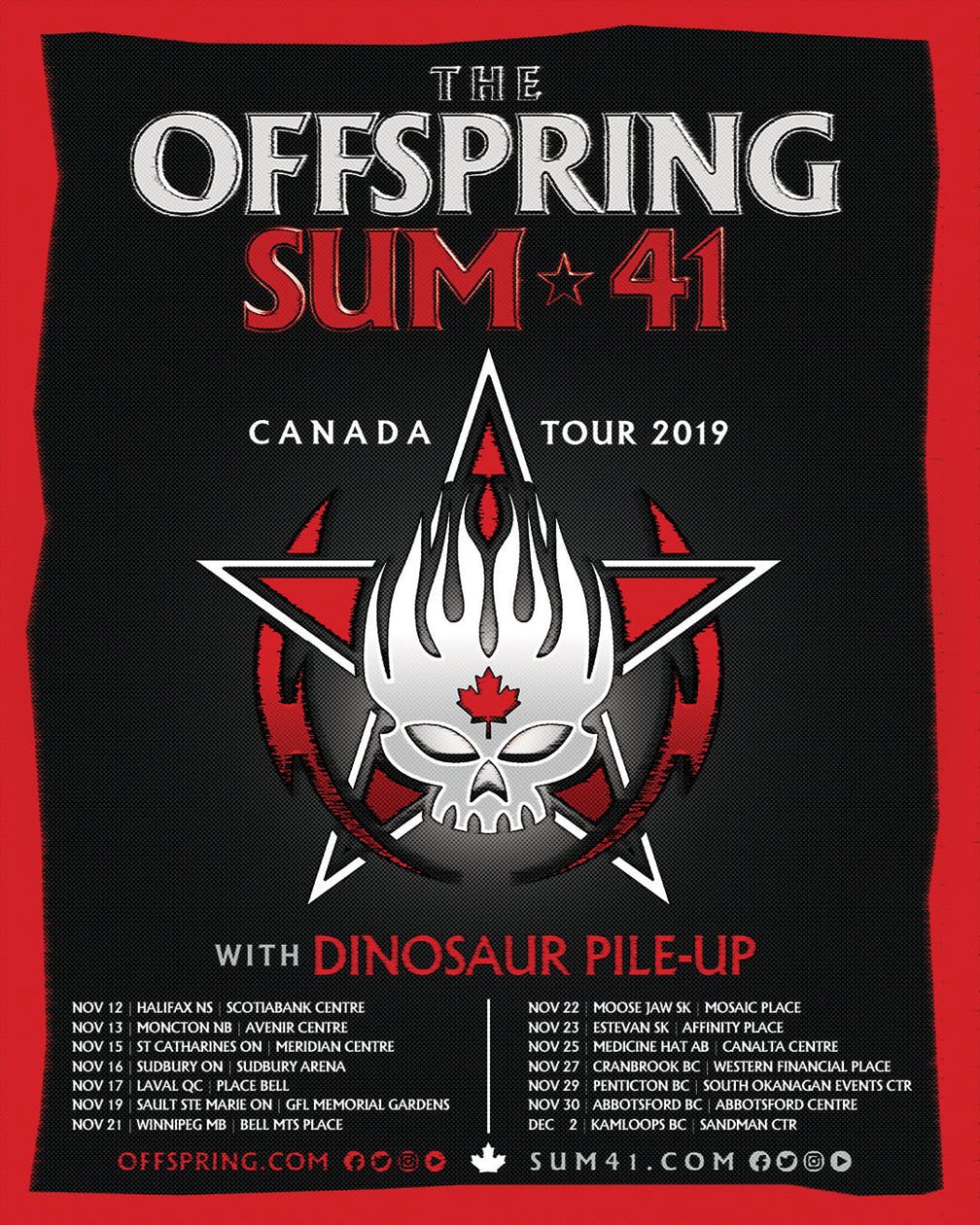 By The EditorAugust 23, 2019Arts, Community
No Comments

ABBOTSFORD, BC (August 19, 2019) – THE OFFSPRING and SUM 41 have announced a Canadian tour with special guests DINOSAUR PILE-UP that will kick off November 12 at the Scotiabank Centre in Halifax, NS.

The mega-platinum-selling Offspring recently announced that they’re putting the finishing touches on their first album in seven years. The band has been recording with Grammy-winning producer Bob Rock in between extensive tours on a yet-to-be-titled album – their first since 2012’s ‘Days Go By’ and their third consecutive release with Rock, who also produced 2008’s ‘Rise and Fall, Rage and Grace.’  2019 marks two important milestones for the Southern California-based group, including the 35th anniversary of their formation and the 25th anniversary of 1994’s landmark album, ‘Smash.’ Since its debut, ‘Smash’ has sold over 10 million copies and remains the highest-selling indie album of all time. The band, who are currently touring overseas, just wrapped a North American run that included Vans Warped Tour 25th Anniversary shows. Their high-octane performance at the recent Atlantic City date drew praise from Brooklyn Vegan, who wrote, “they’ve really got a lot of hits and they still have the energy, the attitude and the nasally sneer needed to deliver. The Offspring’s classics are embedded into punk’s DNA at this point. If you care about this kind of music, they’ve probably impacted you either directly or indirectly. And they still bring it.”

Sum 41 are celebrating the chart success of their most recent release, Order In Decline (Hopeless Records) and have locked in spots at #2 on the Top 200, #1 Rock and #1 Hard Music on the Canadian album charts. The success continued worldwide with #2 spots on both the US Current Rock and Hard Music Album Charts, #3 on the US Alternative Charts, #8 on the US Top Current Albums charts, as well as a #2 spot on the UK Rock & Metal Charts. Order In Decline is available to stream and purchase via Hopeless Records at http://smarturl.it/OrderInDecline. The lead single from the album, “Out For Blood,” landed the band in the Top 10 of the Canadian Active Rock Radio share and currently holds the #7 spot.  The single peaked at #1 on Sirius XM Octane and has been added to numerous streaming playlists.

Over the course of their remarkable career, The Offspring have performed over a thousand shows to packed-house crowds across the globe.  They’ve hit the Top 5 of the Billboard Top 200 Albums Chart 4 times and their last single, Coming For You, marked the 27th Billboard Alternative Songs entry for The Offspring, tying them with R.E.M. for sixth place among acts with the most visits since the chart began in 1988. They join an elite group led by U2, Pearl Jam, Green Day, Red Hot Chili Peppers and Foo Fighters. The Offspring have written and recorded a plethora of blockbuster radio hits,  including “Self Esteem” (176 million Spotify streams and 36 million YouTube views) “The Kids Aren’t Alright” (232 million Spotify, 63 million YouTube), “Pretty Fly (For A White Guy)” (153 million Spotify, 12 million YouTube) and “You’re Gonna Go Far, Kid” (281 million Spotify, 34 million YouTube), among many others. Along the way, they’ve sold over 40 million albums (including more than 11 million copies of 2005’s ‘Americana’) and have racked up billions of streams.