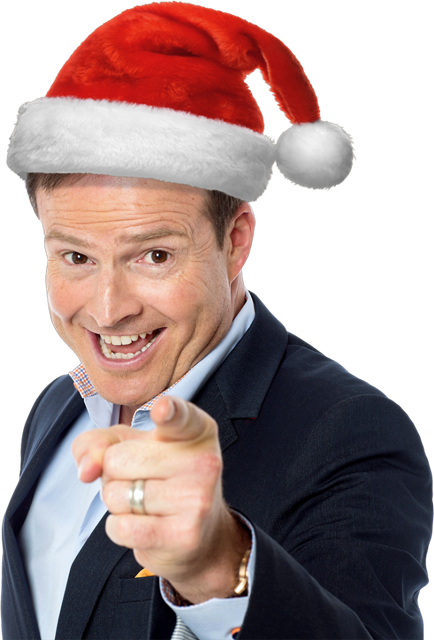 By The EditorNovember 21, 2019Arts, Community
No Comments

(TORONTO, ON) – Following in the footsteps of their highly successful theatre tours of the last two years, The Debaters Live are back and just in the St. Nick of time!

Here comes The Debaters Live on Tour Holiday Special to theatres throughout Ontario and Western Canada featuring the one and only Steve Patterson and two of his funniest comedian/debater friends: Canadian favourite Graham Chittenden and international phenomenon DeAnne Smith!

With cutting edge stand-up from the three seasoned comedians plus two brand new, never before heard debates about the season. This event is NOT PRODUCED FOR BROADCAST BY CBC, so you’ll have to come and experience the action live!

In this age of excessive screens, streams and outraged screams, we’re in danger of losing the most cherished holiday tradition of all – face to face yuletide tiffs with family. And that’s where The Debaters Live on Tour Holiday Special comes in.

“Debate is as old as Christmas,” says veteran host and multiple award-winning comedian, Steve Patterson. “Even the three wise men debated about which gifts to get baby Jesus and in the end none proved very wise. What’s a baby going to do with gold, frankincense or myrrh? Given the surroundings, a blanket would have been a much wiser choice. Or a stuffed animal that didn’t smell quite as stable–like as the actual animals at the birth.”

Graham Chittenden comes to the debate from a do-it-yourself perspective, going so far as to debate inanimate objects when a worthy adversary isn’t available: “Who hasn’t argued with a string of Christmas lights in the middle of a snow storm, while dangling off a ladder? Beginning by threatening the tiny illuminants to ‘light up or else’ and eventually going through the three steps of begging, then prayers, then frozen tears.”

Meanwhile, international headliner DeAnne Smith, whose Netflix special ‘Gentleman Elf’ and online videos have captivated millions, ironically sees the danger of too much screen time: “With everyone on social media reacting to whatever outrage is circulating that day, we’re losing the opportunity to engage in debates the way they were meant to take place –at the family dinner table, while drowning out ‘It’s A Wonderful Life’.”

That’s why this is the perfect show to get the season rolling. Are there jokes? Of course. Relevant points and funny facts? Yes. More so than political leaders’ debates, in fact. But mostly it’s a festive free-for-all that will prepare even the most reticent revellers for a season of disagreements.

So before you get angry in arguments with your family members this holiday season, come and get some ideas on how you could make them laugh instead. The Debaters Live on Tour Holiday Special: the one thing this season everyone can agree on.

Tickets for The Debaters Live on Tour Holiday Special are on sale now at: debaterslive.com.